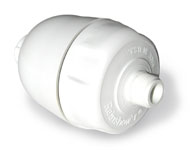 The CQ-1000 filter comes with the housing unit, a RCCQ-A filter cartridge, but no shower head.

KDF is comprised of 50% copper and 50% zinc. It removes free chlorine

by reversing the electrochemical process that originally separated the chlorine from sodium in a brine solution. The chlorine is recombine with calcium to form a soluble chloride, which washes out of the filter and is harmless to humans. KDF not only offers superior dechlorination capabilities, it lasts much longer than carbon

media does. Depending upon the filter model, the amount of KDF, and the water source a KDF shower filter should last seven to nine months.  KDF is also bacteriostatic (inhibits reproduction), and tends to reduce or eliminate fungus and mildew build up in the shower.

Rainshower also incorporates crystaline quartz technology. The purpose of washed and sun dried quartz crystals is to help "energize" the water by reducing the water's surface tension. This allows for an increase in the sudsuing and lathering of soaps and shampoos. The water has a "lighter" feel, similar to the feeling of softened water. Rainshow'r introduced crystal to the general market through the CQ-1000 shower filter series in March 1998 and to its knowledge was the first to do so. Because of the electron movement caused in shocking the crystal an electrical charge is generated which Rainshow'r believes reduces the size of water molecule clusters. In other words making smaller water clusters from larger water clusters. This is also known as “wetter” water. The evidence to support this is claim is the increased sudsing and lathering that result. As with all the materials used in Rainshow'r products, crystal (silicon dioxide) is completely safe and non-toxic. Not only is its chemical combination non-toxic but because of its hardness it cannot absorb materials which could be harmful. Rainshow'r uses only virgin crystal extracted from a specially selected mine in North America. The crystal is ground and processed to Rainshow'r specifications and shipped to us in two thousand pound lots. It is then washed in chlorine free water again and dried in the sun for at least two days. One ounce of the crystal is added to each CQ-1000 cartridge and layer it at the outlet. It is not integrated into the KDF filtering media

The statements enclosed herein have not been evaluated by the Food and Drug Administration. The products mentioned on this site are not intended to diagnose, treat, cure, or prevent any disease. Information and statements made are for education purposes and are not intended to replace the advice of your family doctor.